Reposting this old blog, which has become ever more meaningful to me as pandemic travel restrictions and the impediments of impending old age make it less and less likely that I’ll get back to Austria as much as I would like. 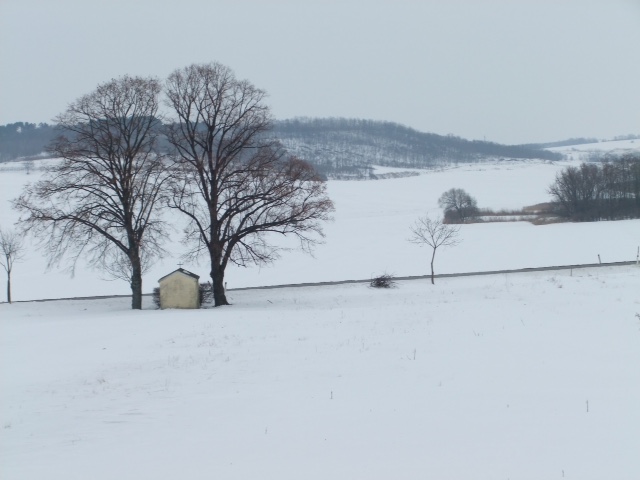 Up near the Czech border no more than an hour from Vienna lies the homeland of Grüner Veltliner, the simple but scrumptious Austrian white you can rely on in almost any bar in the country.

I unknowingly discovered Veltliner in 1973, when long-lost Viennese friends took me out to a Heuriger for a memorable long day’s excursion into night, the details of which I can no longer remember, probably couldn’t even the next morning, except I know that the wine was delicious and flowed without restraint

There is a whole piece to write on what friendship means in Austrian German. This is just the part of it which has to do with wine.

For those who interested in the wider question, what role friendship (here male but there is a female counterpart) plays in Austrian culture, one place to begin would be Thomas Bernhard’s Wittgenstein’s Nephew: A Friendship, among my favourite books, though I hesitate to recommend it to anyone who reads for pleasure.

We could take Bernhard’s “fiction” as the story of the relationship — “Friendship” in the title is both perfectly accurate and scathingly ironic — between two eccentrics, a universal tale which belongs to humanity, and to inhumanity as well. This would be to divest both men of what Thomas Bernhard himself spends much energy denouncing, the sometimes grotesque Austrian garb of their neurotic lives.

The alert reader will immediately grasp where this thought leads, since if friendship is not a universal which humans experience more or less in the same way, than many other presumably noble human ideals are not as well, for example love, already fraught enough when lines of communication are not scrambled by language and different cultural expectations, or hate, or altruism, or bravery, or the difference between bravery and bravado, whatever their equivalents might be in given languages, if those translations can even be found.

I come around to the notion of bravado because of the chain of circumstances which looped me from drinking Veltliner in 1973 back to drinking it in 2010, in the latter case with a shock of recognition but in the former, now it almost seems, with a strange prescience across time and space.

That I found myself back in Austria in 2010 with glass of Veltliner in hand was due to a pivotal incident I can single out, the flippant challenge thrown out at the end of a boozy dinner in May, 2002, that I return to Innsbruck to ski the next winter –”if I had the nerve.”

It was like a hot button. The Texas macho side of my self, which I have for years striven mightily to rein in, suddenly succumbed to inviting echoes, sirens I could hear reverberating up across the stunning slopes of the Alps above Innsbruck, though that was late at night under moonlight and not, as in this photo, on a glorious  afternoon of Foehn. 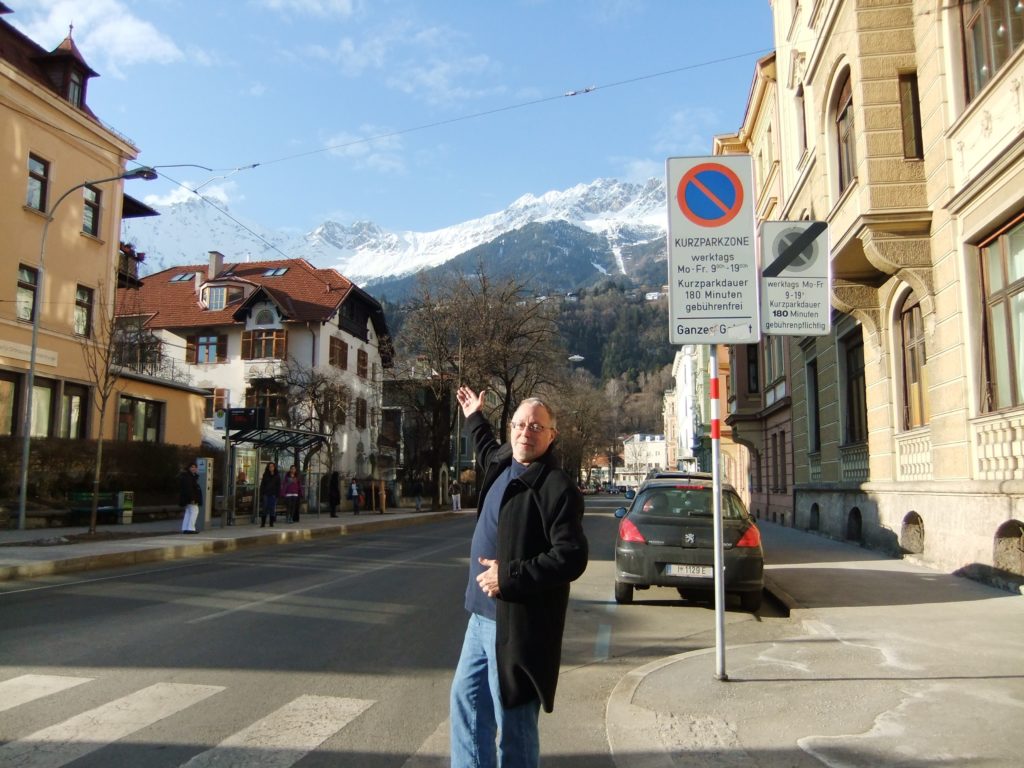 Seegrube above the rooftops of Conradstraße, Innsbruck (18.02.2010). Telling contrast between the kitschy façades and the untramelled, fractal facets of the slopes above.

I had never been a skier, except on water. There is not a lot of snow in Texas and during the year I spent in Grenoble, 1966, I was chronically without the financial ressources to learn. Those among the foreign students I knew then who could afford to ski were scions of Vietnamese bankers who enjoyed reminding me that in just another year or two I would be drafted off to defend their freedoms in South-East Asia, while they could continue to ski in the Alps, studying law or business or whatever on the side, their checks flowing without interruption from Geneva, their ski passes annual.

All it took in 2002 was the barest hint of a dare from my new Austrian acquaintances, Fritz and Bernhard, for me to detect and lock into a routine familiar from the hazing of adolescent rites of passage in Texas. I recognized a behaviorial language I could speak,  the terms of which are bravado, at least the posture of such, one-upsmanship, substance abuse, but also a surge of comradery I had not felt for decades, peels of laughter and shared mockery of self and others, bullshit mixed with the Absurd, surrealism and tall tales (Scheißereden), palliative but disposible philosophies of life I had forgotten the use of, intimate bastions of reprieve from self-righteousness, Selbstgerechtigkeit, the ineradicable vice of right-thinking Texans and proper Austrians, people who seriously need help and will not get it.

Alcohol is a toxin, as professional busybodies remind us everytime they have a chance, as if anyone with a smattering of self-consciousness were not fully aware of this, and from an early age.

Among the alternative agents of alcoholic intoxication, wine offers the most compensatory blessings. Its panoply of tastes and odors connect in mysterious ways with olfactory, gustatory and pheromonal agents sourced from the gamut of plants and flesh we savages consume.

What the puritans do not want us to understand and then say aloud is that the dislocation of experiences and values alcohol wreaks is also sacred in impact, wine and the gods having been linked from ancient times.

Alcohol etches into memory simulacra of the sacramental and nepenthic gestures humans seek in their most vaulted religious and communal rituals, but this potion is readily available on a daily basis, and in portable containers. Though we seek out and pay for alcohol, we do so gratuitously, for no good reason, not because a doctor says it is good for us, as we do compulsively, addictively with the copious output of the pharmaceutical industry, but because we just don’t care about what makes sense nor what might be the right thing to do.

Wine has, in addition, a special – I hesitate to use the word – psychedelic function, rendering up perception of aspects of one’s mind previously unknown.

Proust’s cup-cake would be a rudimentary metaphor for what happens when a slurp of wine courses across the tongue and sloshes along the palate, at least for the wine lush who is used to detecting entrancing traces of memory locked into vinous molecules, who has learned to decrypt the kaleidoscope of sensations triggered by thousands, no, millions of prior taste experiences scattered across a lifetime and now suspended in a fragile but vital web of pulsing associations in a colloidal medium neuroscience still knows basically nothing about, despite its pretentious soup of acronyms.

This I do know: our forebrain or left brain or whatever soggy lobe of it is charged with repression actively works to suppress the flow of imaginative energy along these ecstatically ramifying synaptic meshes. Then the wine comes along, blasting away the log-jam of repressed memories with explosive packets of savour, merciful manna which lifts us from the drudgery of our own petty, goal-oriented rationality.

My friend Bernhard, the same who pointed up at the slopes of Seegrube in May, 2002, recently bought an abandoned wine cellar in The Wine Quarter in Lower Austria (das Weinviertel). He took me there on a day trip up near the village of Mistelbach (Mistletoe Brook). The cellar is a monument to a way of life rather than a working site, though a great place to store wine, even in the depths of winter. 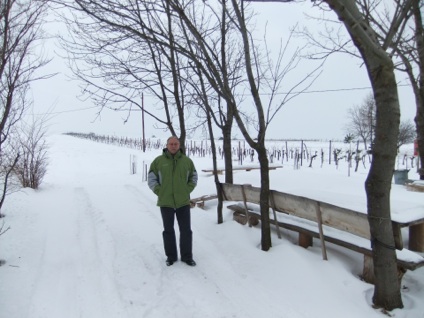 Behind me you can see wines covered with a foot or more of snow.
Bernhard kept talking about coming up in the summer, pitching a tent, hanging out and guzzling Veltliner, grilling sausage on an open fire. He didn’t mention swatting mosquitos or shitting in the bushes. I am not sure that the true taste of Veltliner is not best to be enjoyed in winter, when the roots themselves sleep peacefully under the warm blanket of snow, preparing the next year’s vintage, secretly imbibing minerals from the soil without the brazen interference of the sun – all that dreadful, bright green and distractingly busy photosynthesis summer brings. 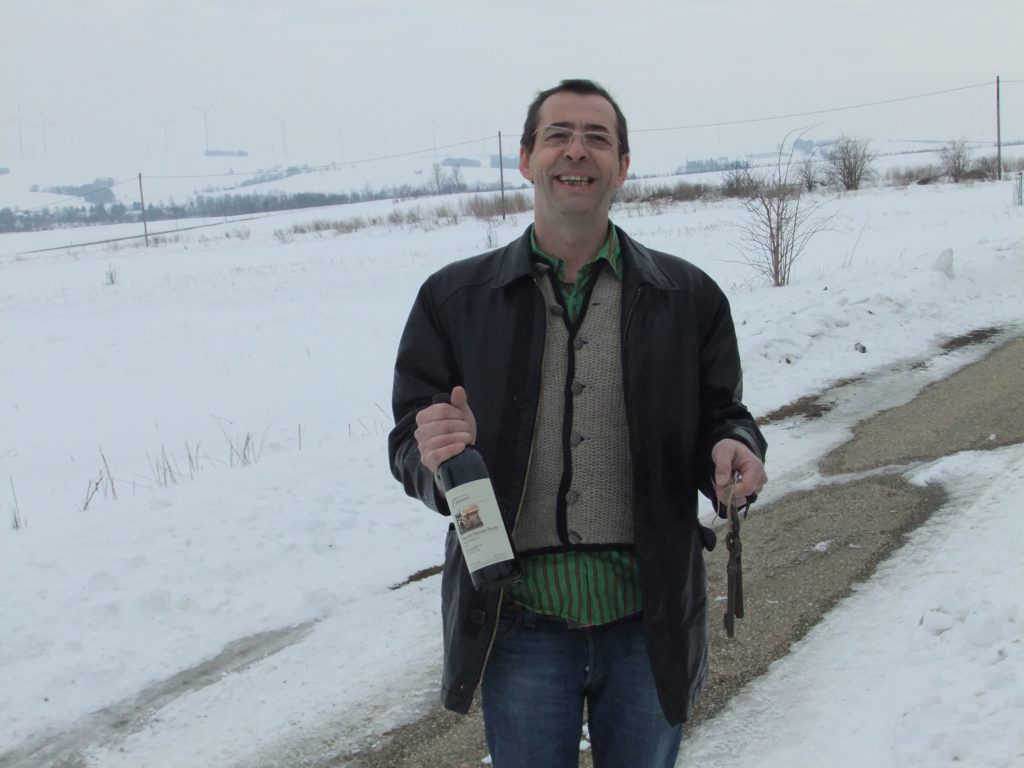 Bernhard with a bottle of Tuscan red retrieved from the cellar, and the keys to his kingdom