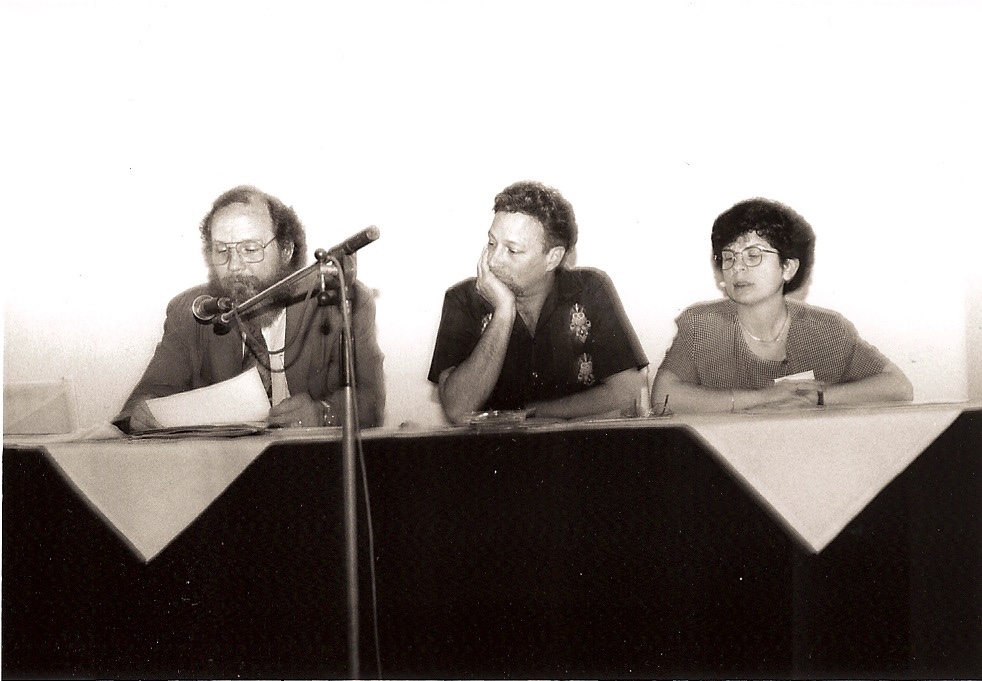 With our friend and colleague Stephen Arnold in Guadeloupe at the 1993 African Lit Association. The occasion was the presentation of the Fonlon-Nichols Award to the Cameroonian – Ivoirien novelist and playwright Werewere Liking.

I had composed a short statement in the best Guadeloupean Kreyol I could muster.  I mustered well enough to have been sorely embarrassed when, afterwards, Guadeloupeans began speaking at me in it.

Regrèt, mwen konnen sèlman kreyòl  liv, I had to say in my pitiful Haitian-inflected Kreyol:

Sorry, All I know is book creole.

When in Morocco last year, I atruck up a friendship with an young expatriate there from Guinea-Bissau. The instant forging of the bond between us was that I knew something about his native Portuguese creole language and that I cited a proverb from Haitian creole.

he and I were speaking French at the time and, telling him I was hungry, I turned to the Haitian proverb Sak vid pa debou (An empty sack cannot stand  up). There  is apparently an equivalent in Guinea-Bissau Crioulo.

He recently asked me via Instagram if I could write him a letter of invitation for a visit to the US.  Diasporans and the otherwise exiled, refugees economic or not, will know how important that is.

Here is my reasoned response, in rather stilted Portuguese.

I have submitted a 1500 word review of the Journal of Pidgin and Creole Languages. Follows a number of reading notes.

Pidgins: “two things stand out, namely that of suddenness and that of social barriers. In other words, two or more groups either experience a sudden need to communicate with one another” (OHLC, p 269)

Note that there is no suggestion of any difference in status, functionality, intrinsic value or quality by this use of the terms younger and elder (OHLC, p. 305)

Lagersprache, the German-lexicon pidgin used in the Nazi concentration and extermination camps.

Code-switching as ludic. The anomaly of monolingualism

Basque, with its scantily attested relative Aquitainian, is one such example (Trask 1997).

Pattern transfer, which led Grant (1999, 2002, 2004) to develop the complementary (not opposing) term transfer of fabric to refer to the replication of morphs (including lexicon) from one language to another (p 13)

Thurston (1987). One notes his ideas about endogenous and exogenous language creation and the relative permeability of the “endolexicon” and its outer carapace the “exolexicon,”

It is not always easy to find reasons on a case-by-case basis why the replacement of one item in a language by a borrowed item takes place. Indeed, the solution often eludes us—but exploring such cases of intimate language contact should enable us to dig more deeply into the kinds of linguistic features that are most readily borrowed. p 16

Frank Jablonka (Jablonka 2017) on the rise of new mixed ethnolects as a fresh result of language contact. p 30

The field has always been conceived of as a multidisciplinary area of study, built around linguistic, sociolinguistic, and psycholinguistic approaches. Weinreich (1953) was the first to propose a systematized and integrated framework within which language contact could be investigated. In particular, he emphasizes that the components of an explanatory framework must include “purely structural considerations…psychological reasons…and socio-cultural factors” (1953: 44). These three components—the linguistic, the psycholinguistic, and the sociolinguistic—remain central to the study of language contact. Ch 2

I argue that van Coetsem’s (1988, 2000) model of language contact offers a more consistent, accurate, and princi­ pled explanation of the processes of change associated with different types of contact. Ch 2, p 52

how macro-level social factors shape the creation of creoles and indigenized varieties, is Mufwene’s (2001, 2008) Ecology of Language (EL) frame­ work. Mufwene argues that different colonization types, and the kinds of economic sys­ tems they engendered, led to differences in population structures, which directly affected the evolution of English and other European languages in their colonial settings. P 54

distinguish between “replication of linguistic matter” or MAT (i.e., morphemes and phonological shapes from a source language), and “replication of patterns” or PAT (i.e., patterns of distribution of grammatical and semantic meaning, and formal-syntactic arrangement). P 56

Weinreich’s (1953: 6) observation that “the individual is the ultimate locus of contact.” P 57

When such speakers attain greater proficiency or even domi­nance in their second language, they tend to transfer features from it to their original language. Such changes fall under the ambit of imposition via SL agentivity. P 59

deal with the fact that the speaker does not master both language systems to the same extent” (2001: 425). Hence, such a model must be able to account for the following aspects of bilingual language production (De Bot 2001: 425): P 67

In both lexical borrowing and classic insertional code-switching, speakers employ the morphosyntactic procedures of the RL as the dominant language, and selectively introduce source language (SL) lexical items, or more accurately lexemes, which are associated with lemmas belonging to RL lexical entries. p 69?

bilinguals can in fact attach the source language lexeme to the RL lemma as an alternative phonological shape that replaces the equivalent RL lexeme (de Bot 2001: 441).