Paella is as much event as food, though argument persists about its right and wrong ingredients and the steps of its confection. I can’t conceive of one without imagining it cooked on a bed of coals on a beach. Purists claim pine and orange branches are a must. Rosemary cuttings would do the job, if you had an open fire.

I’ve never been someone to respect rules, culinary or not, but the confusion of variants in print and online means we have as much license as we wish so long as the spirit of the thing is respected. The dish should be not just rustic but hybrid in flavour. The main components, variously seafood, pork, poultry, hot sausage, garden vegetables and spices, should evoke open air and the smack of both chaparral and sea. That said, I have made both pescatarian and herbal vegetarian paellas. They appeared to please those whose personal tastes go that way.

The recipes call for saffron, no problem in our Persian-inflected household where the pestled powder from the stigma of crocus sativus (‘cultivated crocus’) is a staple always on hand. There is no substitute for its particular odour and aura, related chemically to iodine and chloroform. Yet let its absence not keep you from proceeding.

I don’t recall why quail leapt into this particular frying pan but I do know the artichokes followed from their freshness and cheap availability in the market where I shopped that morning.

This procedure might seem epic. It goes quickly with wine to hand.  If the composed paella is kept covered and warm, it can sit for as long as a hour while the guests socialize. And you too.

For the quail rub: tumeric, sumac and oregano muddled in olive oil with salt and pepper

***
Split the quail in half. Wash and pat dry. Imbue
with the rub. Leave an hour or two, keeping cool.
With a serrated blade, cut off the top third
of each artichoke. Trim the stalks and quarter.
Shear off the leaf spines, working in a spiral.
Microwave in the steam of a covered dish
for four minutes. Cool, pry the fibrous chokes out.

In a skillet, not the paella pan itself,
saute the chorizo pieces, extruding
their fat. Put aside. Deglaze the residue.
Add a splash of olive oil. Brown the quail halves,
outer sides first. Do not overcook. Reserve.

In the same skillet make a sofrito of
onion, garlic, parsley,  lemon zest and piperón.
Join in the tomato paste, then wine or stock.
Reduce. Add the rice. Stir-fry at high heat
until glaucous, adding liquids enough to
keep the mixture from sticking or seizing up.
When the grains are opalescent but still hard,
turn in the saffranade. Simmer ten minutes.

Transfer the concoction into the heated
pan. Arrange the quail on their bed of rice,
around them the shrimp, chorizo, sweet peppers
and artichoke sections. Cover. Nothing now
to do until your guests show signs of hunger.
When ready to launch, pass the composition
into a very hot oven for fifteen minutes.

If the grains are not yet soft, add water
as required. Slip briefly back in the oven.
When done, for want of a fire pit on a beach
set the pan onto a stove burner to toast
the bottom layer of rice into a crust
called socarrat, from the Catalan spoken
in the hinterlands around Valencia.

Garnish with lemon wedges and parsley.
Provide harissa on the side. Serve with cool
red wine and paper towels. This food is hands-on. 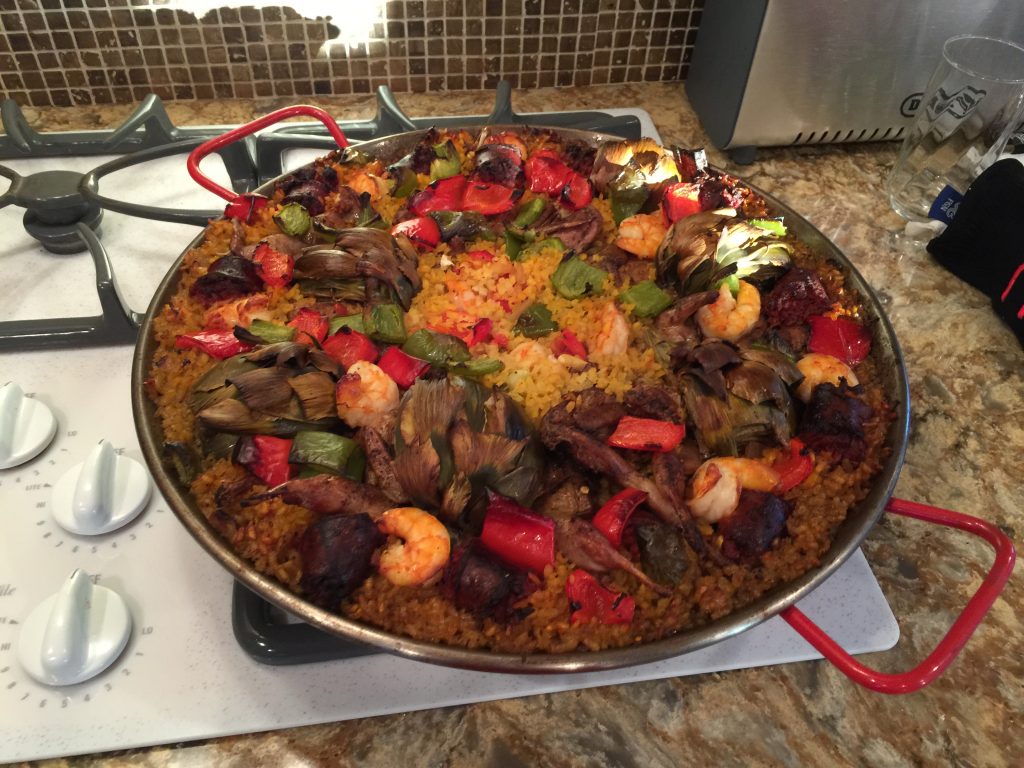