The scholarship is mixed on whether or not Rimbaud, age 16, was actually gang-raped in the barracks of the Paris Commune, as depicted in James Ramsey Ulmann’s potboiler bio The Day on Fire and claimed in Roberto Bolaño’s Los detectives salvajes. That spring of 1871, he was five foot three, slight even for a twink. Over the next year he bean-poled to almost five foot eight. He had run off to Paris to take part in the grand insurrection. 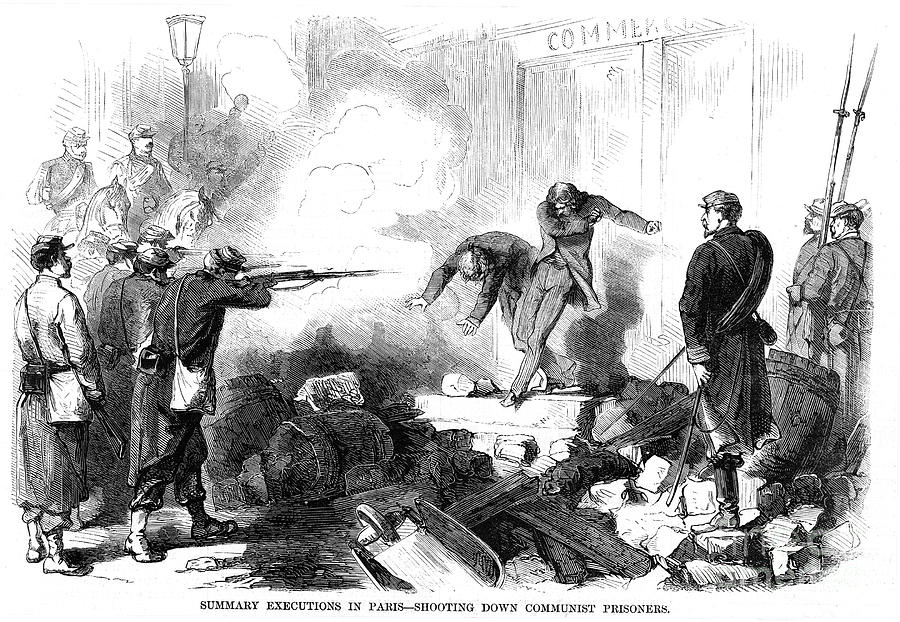 Once back home in Charleville, having avoided the fate shown above, he attached the following poem in a letter to his erstwhile mentor, Georges Izambard. The same epistle contains the famous line, Je est un autre (I is [sic] somebody else).

Two days later in a second more programmatic letter to an aspiring poet friend, Paul Demeny, he called for poets to make themselves into seers through ‘an immense and deliberate derangement of all the senses’ . These two letters may thus be considered Rimbaud’s ars poetica, the agenda which lay behind his coming burst of creativity. With a few months, still sixteen, he had composed Le bateau ivre, my translation of which is here.

Whether the assault took place or not, Rimbaud exploited images of a homosexual gang-rape in Mon coeur supplié, aka Mon coeur volé, his over-the-top piss-take on the conventions of the late medieval triolet form, which had briefly returned to vogue in the late nineteenth century. Important to add: he was targeting the traditional gushy, romantic content of the triolet, not its formal patterns, to which he adhered unfailingly. Such was his ploy. He was sooner rather than later to eschew rhyme and fixed forms in poetry. First, he would show he mastered them. Then, with the impeccable, absolutist logic of a prodigy, he turned to the poetic prose of A Season in Hell and Illuminations. Shortly thereafter, he was to leave poetry itself behind.

There was already a perfectly adequate rhymed translation by A.S. Kline, and a good German one by Thomas Eichhorn, doubtless many, many others. So why this one more ?

Poetry is like an earworm.  A phrase sticks in your mind and unceasingly harkens you back. If a poem is in a second language, one way to purge it is through translation. The opening line of ‘Mon coeur volé’ was one of the first phrases I ever read in French, roughly at Rimbaud’s age when he composed it. I didn’t grasp it then and I still find it enigmatically haunting today. Yet I feel I have finally expunged the slimy, wiggly little thing itself. For me, it shall henceforth be, not Mon triste coeur bave à la  poupe but My poor heart drips at its poop. And I prefer drips to drools.

Other references to Rimbaud in my blogs:
Not All that Beat Either
My Black Orpheus
Frame